In the Fantasy Football League of dance event organisers, we're excited to have put together a brilliant team of star players. They are excellent instructors, well known in the dance tournament scene, and warm approachable people.

Olga was born into a family of teachers and since early years has been an energetic live wire — studying music, doing athletics, martial arts and gymnastics. In 2007 she was introduced to Lindy Hop and this is where the real passion story begins. She got dance hooked and started to explore more of the dance world by getting into Blues and later Balboa.

She has been actively travelling the globe in pursuit of more opportunities to dance, learn and compete. Later she began to share her love for swing music and dance by teaching. Now Olga is an international balboa instructor, teaching solo and couple Balboa all over the world.

At her classes she pays a lot of attention to getting the students interested and involved by giving challenging and fun tasks, working both on technique and musicality and infecting them even more with the love of dancing. For the time being she is passionately developing a new direction of swing dance practices — iSoloBalboa — offline and online solo classes for balboa leaders and followers which aim at polishing up technique and developing creativity and personal aesthetics.

Quote: “I love balboa, because it can be so different — slow and fast, snuggly and dynamic, fun and playful, technical and musical. Balboa connection feels like a cosy warm hug for me, and the dance is beautifully spiced with cool rhythm play, subtle lead-n-follow and shared flow.”

Andreas lives in Stockholm, Sweden. He grew up on the wrestling mat, fighting other little boys in leotards. He won most of the time since he’s always given 100% in everything that he does. He also played the violin in his childhood. You might not think classical music and wrestling has much in common with Swing dancing, but it has definitely contributed to him becoming the unpredictable, creative, musical and interesting dancer he is today. Andreas was introduced to Lindy Hop in 2001 and a few years later to Balboa and other dances.

In his early career, Andreas focused on performance and competition. He was part of the Swedish National Lindy Hop team and the Stockholm based performance troop Shout n Feel it. His international teaching career started in the mid 2000´s. Since then, Andreas teaches Lindy Hop, Solo Jazz, Balboa, Saint Louis Shag, Collegiate Shag and other swing dances all around the world. He often competes and was awarded first place at events as Balboa division at National Jitterbug Championships (Camp Hollywood), Lindy and Balboa division at International Lindy Hop Championships, American Classic Balboa Championships (All Balboa Weekend), Rendezvous Championships (New York Balweek) and Rocky Mountain Balboa Blowout. Andreas is also the reigning champion of the American Classic Balboa Championships at All Balboa Weekend together with Olga Marina.

Andreas is not only involved in the swing dance community as a dancer. He has since many years back been the competition organiser and DJ coordinator of Snowball. He is organising events and is a founder of the Bal-Love festival in Prague, Czech Republic. He is also the launching an online Balboa class system called BALACADEMY, in 2020.

Before working full time with Swing dance, Andreas was working as a maritime archaeologist in Stockholm. Diving, history and archaeology is still one of his greatest interests.

As a dancer, Andreas is known for his unique style, creativity and musicality. He is a technical dancer who is highly appreciated for his social dancing skills and his ability to connect and dance with follows of many different styles. He thinks of himself as a swing dancer first and stresses the importance that dancers today learn a little bit of all the swing dances.

As a dance teacher, Andreas has a warm and comfortable approach towards students. He is known for being good at breaking down the dances in an understandable way through inventive exercises and class content. As Andreas sees it, teaching inspiring not only because it allows you to see dancers improve, but also because it offers a possibility to learn more about dancing and to contribute the ever-changing dance styles.

Watch Olga and Andreas competing at All Balboa Weekend 2019 here.

For four years, Lainey taught at You Should Be Dancing Studios in Manhattan. She organised weekly balboa practices, monthly White Heat dances, and Bal Week.

As a teacher, she emphasises connection to your partner, solid fundamentals, proper body mechanics, and movement inspired by the feel of the music. Her mission: To help you find your own voice and creativity on the dance floor while building body awareness skills.

The first time Blake saw swing dancing, it was in the movie Swing Kids in his European History class in high school. Awed by the exuberant energy of the dancing scenes, he casually thought "too bad this sort of dancing doesn't exist anymore" and went on with his life.

Five years later, he remembered the film and decided to investigate. Finding his local ballroom offered classes in that style, he promptly made a New Year’s resolution to take them. He was immediately addicted — delighted by the vintage feel, improvisation, and avenue for creativity. He immediately dumped the rest of his summer internship money in classes, privates, and travelling for events. He catalogued every single step he learned in an extremely detailed spreadsheet (ask him about it). As time went on, the obsession only grew. These days he exclusively listens to swing music, dances nearly every night, and spends hours analysing vintage dance clips in slow-mo and on repeat.

As a native SoCal dancer, Blake enjoys dancing Lindy, Bal, and Collegiate Shag. However, his values across all three dances stem from Balboa. From the reverence of old timers, to the focus on connection, subtlety, and finesse, Balboa embodies his favourite aspects of dancing, and he brings those aspects into his social dancing, competition, and teaching. 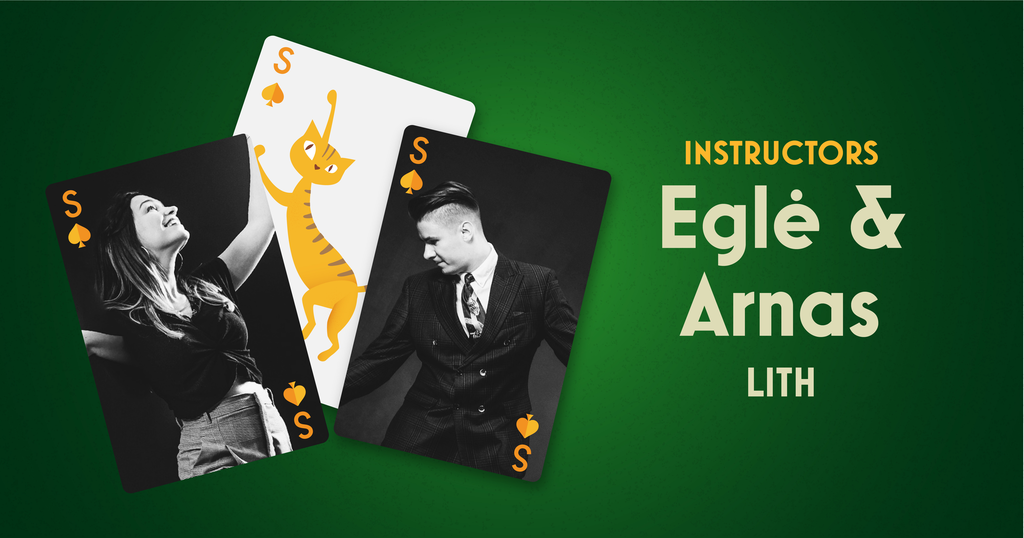 Eglė is a swing dancer from Vilnius, Lithuania where she is dancing, performing, teaching and inspiring the community at What a Jazz dance studio everyday. Dance followed Eglė through all her life, but she found the real passion for Lindy Hop and later on for Collegiate Shag too. Dance has always felt like a big liberation for Eglė. Liberation from routines, thoughts, work, limits. Dancing makes her feel true to herself, music and partner. It gives her the power of total freedom and also a peace to the mind, body and heart. Her rich teaching experience is being increasingly appreciated at the international workshops as well. She shares her enormous passion towards a dance with great joy and commitment.

Arnas is a dedicated swing dancer and instructor focusing on Lindy Hop and Collegiate Shag. He is co-founder of What a Jazz Dance Studio in Vilnius and co-organiser of the one and only Balboa & Shag festival in Lithuania — Swing Paradise. Driven by pure joy and power of swing music, Arnas is actively promoting jazz culture and education with Rhythm Lord Brothers in Lithuania. Rich experience in teaching every day local classes grants quality and fun with clear explanation of his material by expressing swing music and yourself in it. Along with Eglė and the Swingout.pl community he helped create the Collegiate Shag scene in Lithuania and Poland.

Mel and Jo are dance enthusiasts who dedicate their time to encourage swing dancing in the United Kingdom. Being familiar with Lindy Hop and Blues, their current passion is mastering Balboa and Bal-swing — a journey of continuous learning.

They started Salsa dancing in Singapore and after moving to the United Kingdom in 2000 began their journey in swing dancing. After dancing Lindy Hop, Charleston and Blues for several years they then fell in love with Balboa and became dedicated to learning this dance from 2008. However, they still love and continue dancing all styles to this day.

Jo has been athletic since she was a teenager and currently holds a Brown Belt in Xen-Do Martial Arts. Mel, who also accomplished medals in various sports, was a Break-dancer and a DJ in his younger years. From this personal experience, they apply the techniques of physical motion to help them understand and master the nature of dance movement.

Currently, you can find them social dancing and competing at various events across Europe and the United States. They also teach Balboa/Bal-swing and facilitate pilot sessions throughout the United Kingdom and Europe. Their “down-to-earth” and positive attitude helps to make the classes they teach not only informative but also very enjoyable. Mel still continues his love for music as a DJ and emcee at dance events across Europe and the United States.

Their aspirations to be Balboa ambassadors stems from their drive to continuously learn and share the passion and knowledge of dance to enthusiasts alike. 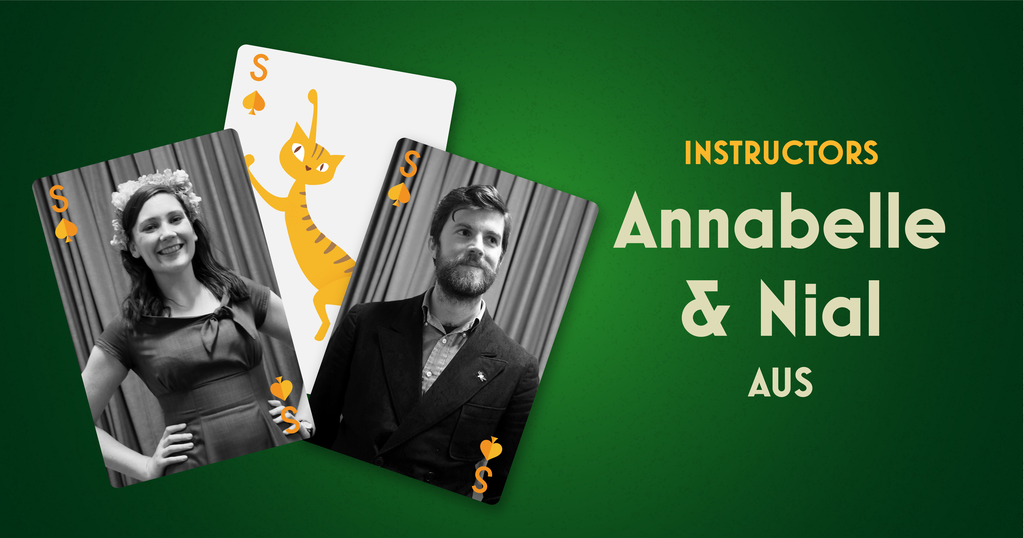 Annabelle began swing dancing in 2012, and quickly became obsessed with learning everything she could, including as many swing styles as possible, as both a lead and follow. Along with Nial Bruce, she’s worked to build up the Australian shag scene, and has competed and taught around Australia and internationally. She has also been part of several performance troupes, including the Bluebelles, Harlem Shout, and Double Rhythm Riot. While she loves competing, teaching, and performing, her main love is always social dancing.

Annabelle loves the unique style of Shag, and encouraging dancers to play and experiment with this versatile dance.

A long time ago, Nial fell in love with swing music when he joined his high school swing band as a saxophone player. Eight years ago he realised he had lost any musical talent he once had and decided to take up swing dancing instead, where he was quickly introduced to Collegiate Shag. He dances as many of the swing dances as he can but shag will always be his favourite and, together with Annabelle, has worked to build the Australian Shag dancing scene.

He's an avid competitor, having picked up multiple awards on his journey, however he's focus is always on the social dancing aspect of Shag. He's excited to continue his swing dance journey and recently organised his first event, The Shag Geek Out, a weekend away where Shag dancers could develop their skills in a communal environment.

Together with Annabelle he's taught around Australia and the world where their enthusiasm for social dancing skills has been well received. He's always up for a dance so never feel too shy to ask.